Mostly-Printed-CNC is a new phenomenon that is made up of 3D printed parts as well as standard metal tubing! This concept is similar to the RepRap printer model concept.

Having access to a 3D printer is key when wanting to access this new device. The device is also more like a router than a classic known milling machine — which is important to note. 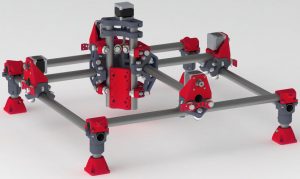 It is called MPCNC, which stands for mostly-printed CNC  and that is the secret of the low price, it is made up of 3d printed parts plus standard metal tubing  much like the RepRap printer concept.

The final size depends on the lengths of tube chosen, and there are versions for either 25mm tube or 1in tube.

Its home page, at V1 Engineering, is here, from where kits of non-printable and non-tubular parts can be bought.

In a gloriously circular idea, the company also sells a kit of parts for a 3d printer, the MP3DP -V2, whose major frame parts can be cut from sheet material on a MPCNC.

As the mill is sort of flat, it is a bit more like a router than a classic milling machine, but none the worse for that.

Here is a video of it cutting aluminium, provided by Brauns CNC.

This (actually, its cousin) was bought to my attention by a Teaching Tech YouTube video. Michael, whose channel this is, is a calm and competent presenter with a trustworthy eye for detail.

The image used above is from the V1 Engineering website.